Does a Pump Always Need a Shaft Seal?

That one time a hydraulic repair workshop signed up for an overhaul of a tiny Vickers PVB pump.

As usual, the estimate got approved by the client, the work was performed by most skilled specialists, the pump was tested and upon the successful test shipped out… to come back on the very next day with a shattered slipper retainer ring and an angry owner, carrying it in a bucket.

Now I would like to let you in on a little secret – the parts used for this repair were… well… it’s not that they were “pirate” or “white-market” or something, no, of course not… – they were… hm…how do I put it?…not quite original, or genuine, if you like… yes, that’s what they were… Anyways, the shop foreman was aware of the “sham”, therefore a decision was made to assume the warranty claim and quietly replace the damaged parts with original Vickers. The pump was, once again, repaired and delivered to the rightful owner. However, the next day’s morning brought along a beautiful sunrise and the already familiar bucket with the very same pump inside!

The damage was another “deja-vu” – the shattered retainer plate with mashed piston slippers and what not… It was at that time that the questions were made about the pump’s working conditions. Naturally, the first suspect was the excessive case pressure – which would be the most common cause of this type of failure – and the client was asked to confirm how many hoses were connected to the pump. Since it was the man himself who’d dismounted the pump, he was sure about the answer and said – two hoses – one for the suction line, and the other for the pressure line. And what about the drain line? – Nope! No drain lines here – just these two… All the other “pump holes” are plugged… Aha! – So it is your fault! You can’t run these pumps without drain lines! – To which the man responded that of course, he knew nothing about oil hydraulics and them pumps, but he was one hundred percent positive that it’s the way this machine had been for the last five years, and he owned two more equal haulers that had these hydraulic pumps connected in exactly the same manner…

The argument went on and on – with one party pointing out the obvious fact that no pumps of this type could possibly survive working with a plugged case line, while the other party saying that despite all this at least three machines had these pumps mounted with all case ports plugged and only two hoses connecting to the pump, being those the pressure and the suction lines… The endplate of the pump was inspected from all possible angles – to see if there was a “hidden” passage or a check valve that would connect the case to the suction line, which indeed would allow this pump to work without an external drain line, however, no such passage was found – the endplate was a solid chunk of metal, with isolated tank and pressure sides – so, “mechanically speaking” this pump had to have a drain line – otherwise the internal leakage would cause the case pressure to go up and eventually break the retainer plate – with all the following…

As I “dropped by” – my opinion on the subject was asked. I was even asked if I could dislocate to the client’s business site to check if these pumps indeed were connected the way the man was saying they were. When I saw the pump lying on top of a workbench – one small detail caught my eye, and to confirm my suspicions I asked if I could remove the shaft – “to check something”.

When I removed and inspected the shaft – I knew exactly what was going on here… And immediately voiced my “verdict” that both arguing parties were right! The workshop was right to defend the fact that this pump couldn’t work without a drain connection, and the owner made no mistake when he said the pump had only the pressure and suction lines connected to it, and all the drain ports were plugged. But how?!!

The answer is – this pump is the tail pump in a two-pump tandem assembly, and its case oil is being drained thought the shaft bearing into the case of the front pump – which also means that it can only work without a shaft seal!!! But how could we know that? Well – first of all, the mechanic who disassembled the pump should have noticed and questioned the fact that it didn’t carry any shaft seal in the first place, but even if he didn’t, or if a different mechanic were to assemble the pump – there were still three sure tell signs present.

First – there was no mark on the sealing surface of the shaft (sorry – no picture here) – any shaft seal leaves a mark, especially after several thousand hours of work.

Second – the drain port was plugged, and the plug was properly tightened – in most cases, you can tell a difference between a plug that’s just been lightly tightened for transportation purposes and a plug that’s been sitting there untouched for the last couple of years.

Third – the front bearing had no shields. In a standard PVB the front bearing is shielded and has grease inside – in this case, the shields were removed to let the oil flow through the bearing. It was this “small detail” that caught my attention when I saw the unit lying on the workbench.

So, there you have it, folks, – some hydraulic equipment manufacturers opt for replacing the standard external drain connections of pumps and motors with removed shaft seals. Obviously, this solution is only viable for relatively low drain flow rates and only for tandem units, or when a pump (or a motor) is connected to a gearbox, in which case the leakage oil also serves for the gearbox lubrication/cooling purposes (older Atlas Copco core drilling units, for example). It is very important to identify these units and serve them adequately, and if the shaft seal is needed to perform bench tests, it should be removed after the tests are finished – otherwise, there is a serious risk of “over-fixing” the unit and causing serious damage to the client’s machine as well as the shop’s reputation!

A few sad pictures of an A11VO160 open circuit pump, I believe this one even had old Hydromatik name plate, which is a rare sight these days. Gone, completely destroyed… Note the damage to the back plate sealing face, that’s a lot of lapping for someone… 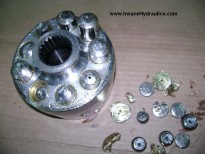 O’ring to Retain a Rotary Group

A few sad pictures of an A11VO160 open circuit pump, I believe this one even had old Hydromatik name plate, which is a rare sight these days. Gone, completely destroyed… Note the damage to the back plate sealing face, that’s a lot of lapping for someone…

This is a neat way to insert a rotary group into an axial piston pump or motor with the pistons pointing down. Very often there’s not enough space to hold the pistons and the retainer plate with your fingertips, and since the pistons tend to fall out of the barrel, the insertion process may become somewhat “awkward”, forcing you to put the unit on its side and insert the rotary group assembly in the horizontal position.

A simple o’ring (adequately large, of course) arranged in a tying loop can be of great help here – creating an elastic retainer that puts inward pressure on the pistons and does not let them slip out of the cylinder block. The pictures are pretty self explanatory. Just don’t forget to take the o’ring out after the rotary group is in place! 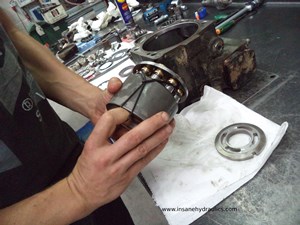